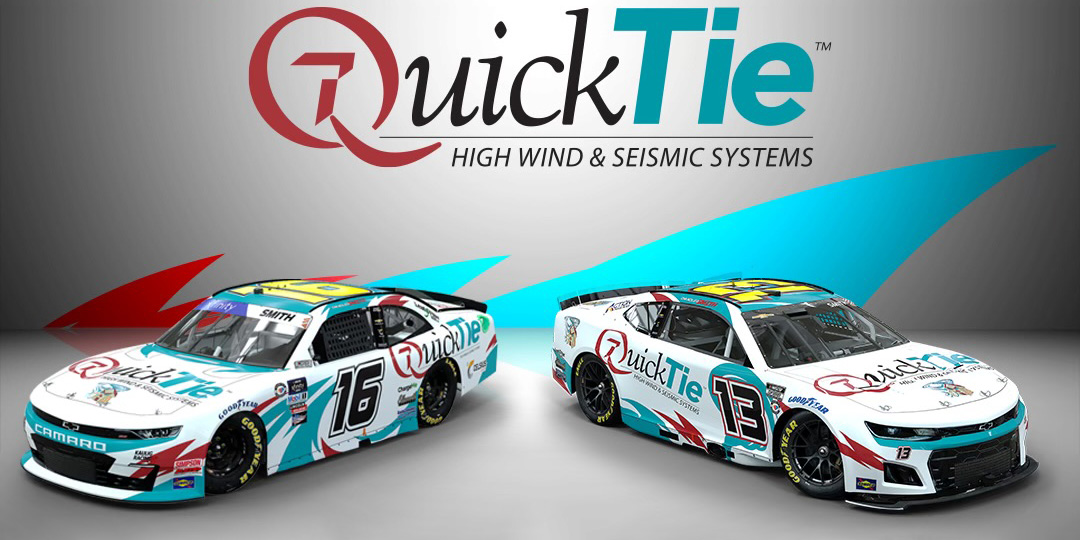 LEXINGTON, N.C. (January 18, 2023) – Kaulig Racing and Chandler Smith will partner with Quick Tie Products, Inc., (Quick Tie) as Smith attempts to qualify for the 65th running of the Daytona 500 in the No. 13 Camaro ZL1. Quick Tie, a proprietary, patented hold-down system for high wind and seismic construction, has signed on for five races during the 2023 NASCAR Cup Series (NCS) season, beginning with the pinnacle event in NASCAR.

Smith, 20 years old, finished third in the NASCAR Craftsman Truck Series (CTS) Playoff Standings in 2022 after three wins, nine top-fives, and 16 top-10 finishes in 23 races. Smith got his feet wet in the NASCAR Xfinity Series (NXS) in 2022 as well, making three starts and earning one top-ten finish. In the fall of 2022, Smith announced he would compete full-time in the NXS with Kaulig Racing in the No. 16 Chevrolet Camaro.

“This is a dream come true for me,” Smith said. “As a kid, you always have the goal of one-day racing in the Cup Series. I’m hoping that comes true in this year’s Daytona 500. I’m thankful for Harvel Crumley and Quick Tie for the opportunity to run in multiple Cup races this year, and I’m beyond appreciative of the belief that Matt Kaulig and Chris Rice have in me.”

Following the NCS season opener, Smith will compete in the Toyota Owners 400 at Richmond Raceway, the NASCAR All-Star Race, the YellaWood 500 at Talladega Superspeedway, and the season finale at Phoenix Raceway in the No. 13 Quick Tie Camaro ZL1.

In addition to their commitment to Smith and the NCS Quick Tie will also serve as a primary sponsor of the No. 16 Chevy Camaro for multiple races during the 2023 NXS season.

“We’re extremely excited about continuing our sponsorship of Chandler,” Quick Tie CEO Harvel Crumley said. “We started sponsoring him when he was eight years old. It has been a great experience seeing him grow and become a very talented driver. We look forward to continuing that experience as he moves up to NASCAR’s Xfinity and Cup Series with Kaulig Racing. We at Quick Tie look forward to being supportive and enthusiastic partners with Chandler, Matt Kaulig, Chris Rice, and the whole Kaulig organization. We consider it a great privilege to be part of this team for the 2023 racing season!”

“Chris and I knew who we had in Chandler when we brought him into our team fold at the end of last year,” Kaulig Racing Owner Matt Kaulig said. “He made such a splash on the Craftsman Truck Series in the last couple of years. We have the utmost confidence in his full-time Xfinity Series run this year, and with Quick Tie, we think he will turn some heads in his Cup Series starts.”

The 2023 Daytona 500 will occur at 2:30 p.m. on Sunday, February 19. Smith’s first chance to qualify for the race will be during Busch Light Qualifying on Wednesday, February 15, followed by the Bluegreen Vacation Duels at Daytona on Thursday, February 16.

Kaulig Racing™ is a full-time, multi-car NASCAR Cup Series (NCS) and NASCAR Xfinity Series (NXS) team, owned by award-winning entrepreneur, Matt Kaulig. Established in 2016, Kaulig Racing™ has made the NXS Playoffs, consecutively, each season since the playoff system started and has won back-to-back regular-season championships. Before becoming a full-time NCS team, Kaulig Racing made multiple starts in the 2021 NCS season and won in its seventh-ever start with AJ Allmendinger’s victory at “The Brickyard” for the Verizon 200 at Indianapolis Motor Speedway. The team expanded to a two-car, full-time NCS team in 2022, with Justin Haley piloting the No. 31 Camaro ZL1, and an all-star lineup featured in the No. 16 Camaro ZL1. Haley will continue to pilot the No. 31 full-time in 2023, alongside AJ Allmendinger, who will drive the No. 16 Camaro ZL1. The team will continue fielding its three, full-time NXS entries for the 2023 season.

Prev
We use cookies on our website to give you the most relevant experience by remembering your preferences and repeat visits. By clicking “Accept”, you consent to the use of ALL the cookies.
Cookie settingsACCEPT
Manage consent

This website uses cookies to improve your experience while you navigate through the website. Out of these, the cookies that are categorized as necessary are stored on your browser as they are essential for the working of basic functionalities of the website. We also use third-party cookies that help us analyze and understand how you use this website. These cookies will be stored in your browser only with your consent. You also have the option to opt-out of these cookies. But opting out of some of these cookies may affect your browsing experience.
Necessary Always Enabled
Necessary cookies are absolutely essential for the website to function properly. This category only includes cookies that ensures basic functionalities and security features of the website. These cookies do not store any personal information.
Non-necessary
Any cookies that may not be particularly necessary for the website to function and is used specifically to collect user personal data via analytics, ads, other embedded contents are termed as non-necessary cookies. It is mandatory to procure user consent prior to running these cookies on your website.
SAVE & ACCEPT